I found this video of my old band WORDBUG playing live in someone's back garden in Belgium back in the early 90's (around the time the Cavern first started). It was a weird gig - I don't now much about Belgian licensing laws but it appeared as if some kid had turned his terraced house into a pub, with bands on in the back garden! It was a proper bar with ale on draught, bar staff, spirits on optics etc.
We were touring Europe with a Belgian band called BYETAIL, playing squats and anti fascist benefits and generally having a great time. The photos are when Craigy was still in the band, the vid is around the time we were changing into ANNALISE, with Tripey on guitar.... 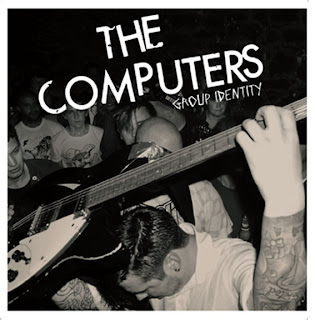 Been busy doing a load of work for Exeter punk and roll band THE COMPUTERS this month. Their new single (released on 7" White vinyl) is out on the Cavern's 20th Anniversary MON FEB 14th and looks like its going to do very well indeed! The band have just signed to One Little Indian (home of Bjork and Dan Sartain among others).
Just before Christmas we filmed a video for GROUP IDENTITY down in Kingsbridge at Aiden's Nan's house! The video was shot and edited by CARL SHANAHAN on a bitterly snowy day. It was that week when Devon ground to a halt with snow blocking all but the main roads, and it was so cold that the batteries to my camera drained in about 5 minutes when we went outside to take some stills.
Fair play to Aiden's Nan for letting us use the house though - the footage is actually of a real gig and a number of shelves came down with ornaments everywhere!

We've just filmed a new video at the Phoenix for MUSIC IS DEAD which Carl is editing this week for a very tight deadline! I'll post it in this Blog as soona s its ready to go....
Posted by THE CAVERN at 15:55 2 comments: