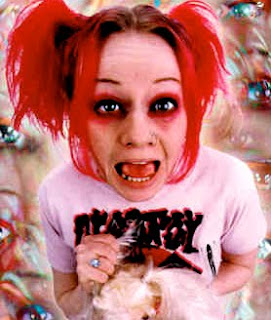 I met Ronnie, the original Cavern manager, through her band FRANTIC SPIDERS, Exeter's first and best 'Riot Grrl" band.
They had been making a name for themselves supporting the likes of Huggy Bear and The Voodoo Queens around the UK, and were on this occasion playing with us at Exeter Art College.
I was at the bar when Ronnie walked past carrying a ridiculously tall tower of glasses.
“Can you drink up please mate!” she barked at a frightened looking student in John Lennon glasses and a Doctor Who scarf, snatching his half-finished drink and adding it to to the top of her large stack.

When I got back to our van it was so full of empties you couldn’t fit in the amps.
“Somebody said you were opening a pub.” Ronnie explained. “I thought you could do with some glasses!”
They had collected about 400 of them.
“Hey, do you want to be bar manager?” I asked her, while the hapless Art College dudes walked around scratching their heads, looking for something to put in the dishwasher. 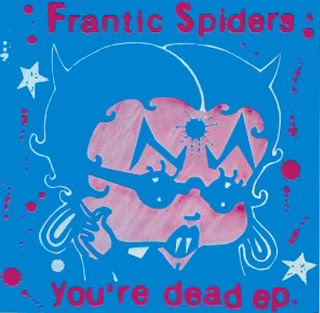 The Frantic Spiders had been played on the John Peel Show, and got ‘Single of The Week’ in Melody Maker for their “You’re dead” 7” single. They were on the verge of being signed to Elastica’s label before they went their separate ways.
Singer Charlie went on to playing in Spy 51 and Gay Dad, and Ronnie started here ultraviolent industrial noise band TOXIC SHOCK SYNDROME.

TSS were a band that really tapped into the raw emotions of life, with Ronnie’s onstage personas, such as the bloodsplattered Psycho Surgeon, really acting as a protective buffer between band and audience. By that I mean the Personas protected the audience from the true content of Ronnie’s songs!
She is a great writer, and went on from TSS to become reviews editor for Rocksound.
I found this battered, never-before-seen, video we made for Toxic Shock Syndrome in the early 90s.
We filmed it in that Pet cemetery down by the bridge to the Double Locks.
Posted by THE CAVERN at 10:10 4 comments: 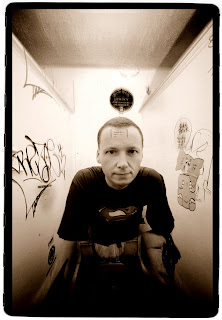 KING LUDD on Fore Street was a great bookshop. For a couple of years it was THE place to go for rarities and books by Burroughs, Kerouac all that sort of stuff. It was killed off when Oxfam opened it's South Street bookstore - how could you cope with a shop that survived on donations when you had to buy all your stock in. Day in, day out John must have heard the 'I get all my stuff from Amazon' mantra from people sitting there bugging him on that chair by the counter with a free cup of tea!
One day we went in there to make a little film with writer Stewart Home (author of Cranked Up really High, Suspect Device and 1001 Things To Do With A Dead Princess).

I've got some videos somewhere of Stewart doing a mad spoken word performance at the Cavern. He'd been invited down by artist Fiona Symes to do a reading at the Art College. The photo at the top was taken at The Cube in Bristol where he was showing his 'film' Screams In Favour Of Desade.
Posted by THE CAVERN at 16:29 No comments: 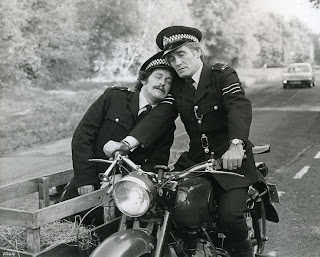 (N/B this true story won't mean anything to those under the age of 25)
Walking round the corner toward my house I heard a strangely familiar voice shout "Eh Tommy, I can't get this piggin' thing out of the car on me own can I?"
I'd come home to get a couple of spare cables from my house for the show we had on that night (Lapsus Linguae and Kids Near Water), and in my drive, no word of a lie were 70's comedy duo CANON AND BALL unloading some boxes!
I gave Bobby Ball a chin up nod and went into my house where Clare was watching TV.
"You'll never guess who Ally (our dog) just attacked outside on the road." She said.
"Yeah I saw them - Canon and Ball."
"No - it was Little and Large." She replied.
"No its definitely Canon and Ball." I contested.
"But I saw Lttle". She said
I grabbed the cables and went back to the club : outside, Syd Little was standing by the car, late afternoon sun glinting off his thick glasses.
Dunno where Large was.

For people who were born in the 90s here's Little and Large with Adam Ant on their show. 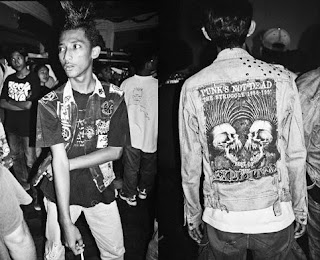 I found this old video of ANNALISE playing Selling Sand in Kuala Lumpur in 2000. It turns out we were the first UK punk band who ever played there (most bands stopped off at nearby Singapore where the fees were higher.) NAPALM DEATH were the second band to come to Malaysia. The scene in KL was great - helped a lot by a guy called Joe Kidd who played in a band called The Shitworkers which is the name Maximum Rock 'n' Roll - the punk zine he wrote for - called it's correspondents.

Malaysian kids are really into street punk and hardcore and we played some mental shows there. This one was in a restaurant that Joe Kidd had somehow managed to book out. Crowd surfers were getting seriously close to those massive ceiling fans!
More about this tour on my website http://www.artefiction.co.uk
Posted by THE CAVERN at 08:50 No comments:

THREE SHEETS TO THE WIND WITH SILVER APPLES 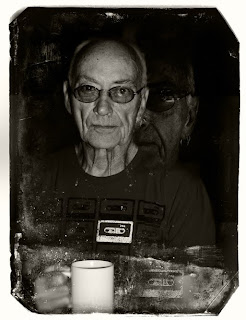 I took this picture of Simeon Coxe having a cup of strong black coffee this morning after one of those 'late ones' you invariably have when running a bar. We'd been drinking mini bottles of Oliver And Greg's Sauvignon Blanc*, and eventually got around to the profound idea that 'The Governments don't run the world, The Banks do!'
Dave Myers was on double Vodka and Red Bull, and was well up for fucking the system. Simeon was bent over thumping the bartop with the heel of his fist at the outrage of it all. "Obama, Hilary Clinton - I don't give a shit who's in the White House - they're all puppets of the Multinational Corporations!" Ever had this conversation at 2.30 in the morning, three sheets to the wind - I bet you have!

The Silver Apples show tonight was an important one ... if you know your rock and roll history.
Formed in 1967 the music of Simeon Coxe and drummer Danny Taylor not only pre-dated and informed Krautrock bands like NEU, but also directly influenced punkrock and hip hop. "Sid Vicious told me" Simeon said "that the Sex Pistols always played Silver Apples in the dressing room before going onstage." 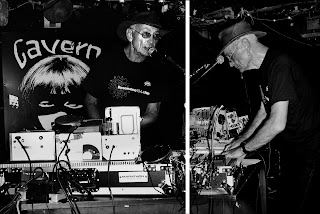 Danny died in 2005 but Simeon keeps those amazing beats alive on loops he plays alongside his infamous oscillators. The songs are breathtakingly beautiful, and you can see why his fans include Blur, Sonic Youth, Devo and James Lavelle. The 1960's scene must have been astounded to hear such sounds coming out of a table full of vintage electronics...

We got lucky tonight actually, because all Simeon's gear is powered off a 110 supply and needs a step-down converter to fit The Cavern's 240v plug sockets.
I got one for £14.99 in Maplins, but the kid said "It should be fine so long as you're not running musical equipment off it."
It lasted exactly 52 minutes before burning out - but that was alright - Simeon didn't want to do an encore anyway! 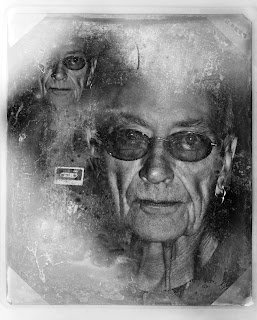 *People don't seem to like this as much as the Zinfandel Rose, which is why I've got fridgefuls of it!
Posted by THE CAVERN at 07:57 1 comment: 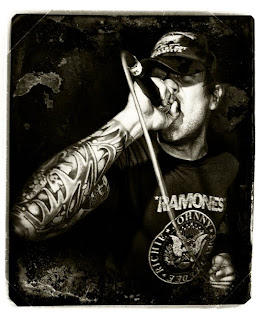 I'm putting a new set of exhibition prints together for an idea called 'Decayed - Ten Years of Punk Photos. I'm going to make it part of the LIKE MUSIC event on Oct 29. These pictures are of HOPE CONSPIRACY and CLUTCH. I got the idea for DECAYED from Bill Morrison's 2002 film DECASIA, a brilliant piece of work made from damaged found footage. http://www.decasia.com 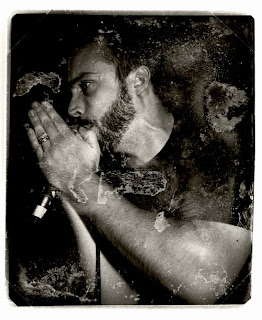 PARANORMAL ACTIVITY AT THE CAVERN 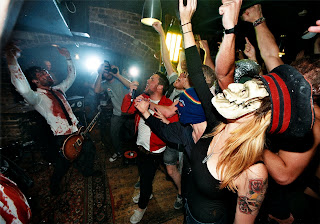 I just had an email from an organisation called The North Wales Paranormal Society "looking into the possibility of doing a paranormal investigation at The Cavern Club when the club is closed". The thing is nothing weird ever happens in the club - I would know, I've been in there every day for 20 years taking photos on a regular basis! Surely, in all that time, something strange would have shown up on film..... 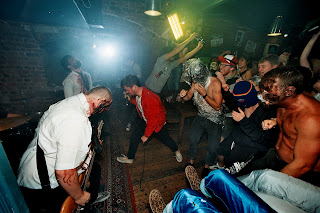 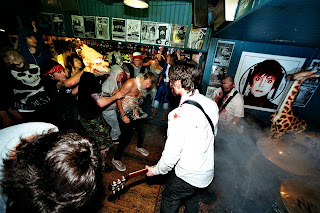